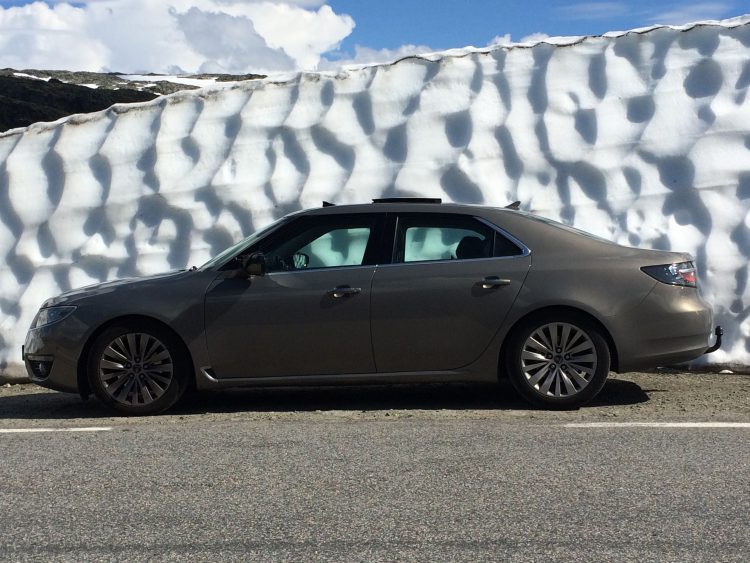 We bought our SAAB 9-5ng in January 2016. Our previous SAAB had a diesel engine, because of the kilometers we drive. So the 9-5ng should also have a diesel engine as well. I prefer to look in The Netherlands. First I saw a beautiful one for sale in Arnhem. It was in the color Oak with everything I would love to have. But it costs also a lot of money and it had almost 180.000km on the clock. So eventually this one was sold not to us.

Then there was a beautiful one for sale at our dealer. Fjord Blue with a lot of accessories I would love to have. It had less than 110.000km on the clock, but with a high price as well. The price was over budget, but I test drive it anyway.

While doubting for the blue one, there came another one for sale. It had the color Oak with a lot of accessories I would love to have. It was a private sell and the car came from Belgium. It also had a few problems and already 190.000km on the clock. So the price was a lot less than the blue one. This one had a TTID and so it has a manual shifter. Since I drove almost 15 years automatic I wasn’t sure. After a week of thinking and getting some more money off the price we bought the Oak one.

Oak TTID and what more

So the color is Oak and the engine is a TTID with 190hp and 400nm. That should be enough to carry our caravan even it has a manual shifter and it is enough as we found out during summer holiday in Norway in 2016. The version of this 9-5ng is Vector Exclusive and that means it has a already a lot of nice accessories like xenon, navigation with a harddrive for music, seat heater, dimming mirrors and nice interior lights. Above this it has a specific wish and that means it has airbags in site cushions of the rear seat. So we are all surrounded by airbags. Something that was missing our previous SAAB 9-5. Than it has some nice extra accessories like full leather seats, panorama roof and head-up display. The previous owner also had summer and winter tyres and roof racks. This means that we had everything that we needed.

It came with a few problems

When we bought the car it had the for TTID specific oil pressure problem. So after driving home the first thing I have done is bringing the car to our dealer to have the oil pressure problem solved. It took some time and then in the Facebook group The SAAB 9-5ng connection someone posted how to solve it. See my post Issues with oil pressure on a SAAB 9-5ng TTID for all the details.

Another problem were the seat heaters that didn’t work. It is also a common problem for the 9-5ng. So in November 2016 I took the SAAB to our dealer to have the heaters replaced. After that another issue we had to deal with, which was a problem with the acceleration. At first the gaspedal was replaced, but later it was clear that this wasn’t the issue. See my post Issues with acceleration on a SAAB 9-5ng to learn what to do to solve this issue.

Last thing was the steering wheel that was not straight while drive straight and the car always went a little bit to the right. Our dealer did a complete alignment of all the wheels and now everything is straight as it was original.

Were there more problems in the first year

In the first year we drove the car from 192.500km to 220.000km. The 9-5ng is using more fuel than expected and therefore I was looking if it is normal or is there a problem. Well it was not completely normal, since the timing belt was renewed and not set 100% correct. Our dealer corrected the timing belt and that does created a little bit better fuel consumption. It is still not the amount written in the books and it is not as much less than our previous 9-5. But our previous 9-5 did not had a diesel particle filter (DPF) and had Hirsch tuning. Two things that led through a very nice fuel consumption. Perhaps we need to get our 9-5ng tuned as well.

At the end of the first year the characteristic lightbar of the 9-5ng dimmed the lights. So I am looking for repair. See my post Lightbar dimmed on a SAAB 9-5ng for all the options there are.

That were the problems in the first year. However we did bought a few other things. One item was the third headrest in the middle of the rear seat. In The Netherlands you could only bought all the airbags together with the third headrest, but perhaps in Belgium not. The car also came with a tire repair set instead of a spare wheel and stuff to change the wheel, so we bought all these items.

So that was our first year. Let’s see what the second year will bring.